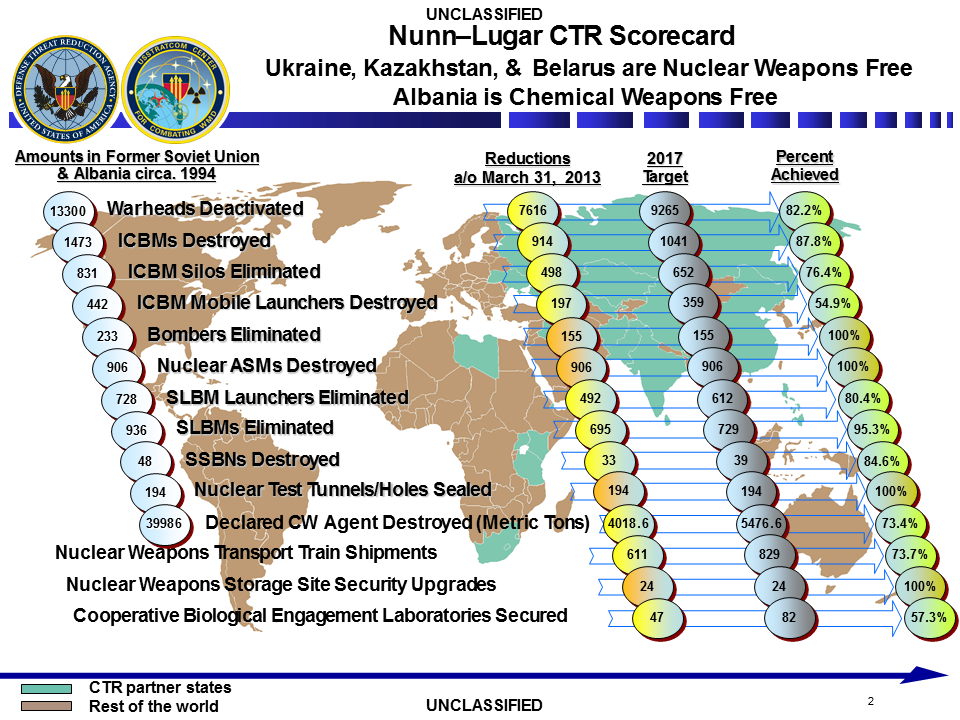 The proliferation of weapons of mass destruction remains the number one security threat facing the United States and the international community.

The Lugar Center is devoted to the principle that calamities involving weapons of mass destruction are preventable if responsible governments, organizations, and individuals dedicate themselves to the painstaking work necessary to constrain this threat.

The Lugar Center is inspired by the work of Senator Richard G. Lugar, who for more than two decades has been a leader in nearly every important non-proliferation and arms control initiative undertaken by the United States.

Senator Lugar was the co-author of the landmark Nunn-Lugar Program passed in 1991. This program has worked cooperatively with Russia, Ukraine, Kazakhstan, Belarus and other nations to safely secure and dismantle vulnerable stockpiles of weapons and materials of mass destruction in the former Soviet Union. It has assisted in the deactivation of more than 7,500 nuclear warheads; the elimination of 2,000 intercontinental missiles; and the destruction of 1,000 missile launchers. The program has helped to secure innumerable biological pathogens, and it is proceeding with a project to destroy almost two million chemical weapons.

"The Lugar Center is devoted to the principle that calamities involving weapons of mass destruction are preventable if responsible governments, organizations, and individuals dedicate themselves to the painstaking work necessary to constrain this threat."

Senator Lugar passed legislation expanding the scope of the original Nunn-Lugar program so that it could meet threats anywhere in the world. For example, Nunn-Lugar has destroyed chemical weapons in Albania, provided security to African research labs studying dangerous pathogens, and facilitated WMD security agreements in East Asia. The Program exists as an important resource for responding to proliferation emergencies and building ties to countries that want help contending with WMD stockpiles and infrastructure. Nunn-Lugar also has been a vital component of bilateral arms control agreements between Russia and the United States.

Senator Lugar was at the forefront of efforts to evaluate and pass arms control agreements including the START agreements, the INF Treaty, the Chemical Weapons Convention, the Moscow Treaty and others. He was the lead Republican fighting for the successful ratification of the New START agreement with Russia in 2010.

Controlling WMD is essential, not merely because of the horrific loss of life that could result from a WMD attack. Such an attack carried out by a terrorist group or nation could shake the global economy, further burden national budgets, constrain investments in human development, and create instability in many parts of the world. This would increase the chances for nuclear proliferation and add disturbing uncertainty to future terrorist threats. 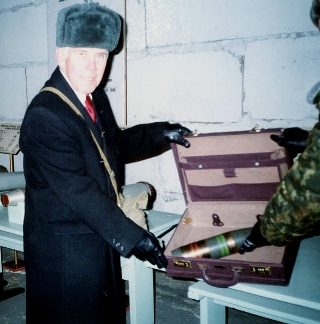 The Lugar Center believes that although the risk of a nuclear weapon being used is the most profound of the WMD threats, the risks associated with biological, chemical, and radiological weapons should not be underestimated. These WMD materials generally are surrounded by less security and are simpler to weaponize.

The Lugar Center seeks to educate citizens, students, and leaders on the risks of proliferation of nuclear, chemical, biological, and radiological weapons and materials. The Center emphasizes especially the security of these weapons and the construction of international agreements and norms designed to reduce their numbers and prevent their use. It works to ensure that the international community maintains the technological and human capabilities and political will necessary to peacefully inventory, inspect, safeguard, and deactivate weapons of mass destruction when such opportunities present themselves.

The Lugar Center works with like-minded organizations to develop policy proposals that further these goals. The Center advocates for resources to support non-proliferation objectives and for measures to reduce the bureaucratic and political obstacles that sometimes inhibit national and international efforts to reduce the WMD threat. It fosters bipartisan dialogue on arms control issues and the future of the United States' own nuclear weapons. It also promotes the U.S. government's engagement with foreign officials and governments on securing their cooperation for protecting WMD materials.

In partnership with the Arms Control Association, The Lugar Center is conducting the Bipartisan Nuclear and WMD Policy Dialogue Project to overcome the slowing momentum in improving security of nuclear materials and weapons. TLC and the Arms Control Association are producing a series of roundtables on nonproliferation and arms control issues for Congressional staff to stimulate bipartisan dialogue on reinvigorating Congressional leadership on these issues. Learn more about this partnership here.

The Arms Control Association and The Lugar Center have partnered to establish the Bipartisan Nuclear and WMD Policy Dialogue Project to help foster bipartisan discussion on timely security issues. The program does not seek any policy outcome or enactment of any legislation. Our mission is to provide a forum where senior national security staff across committee jurisdictions and party affiliations can establish relationships and a basis for working together more effectively, as well as increase the overall knowledge base and awareness of WMD risks and risk reduction strategies.

Established in November 2013, the Project organizes a series of private dinners and congressional briefings on specific topics of interest to Republican and Democratic congressional staff. These events are off the record, emphasize constructive dialogue, and provide a forum for staff to engage high profile speakers. Topics will include:

The project is made possible with support from the Carnegie Corporation of New York.

WASHINGTON, D.C. – November 18, 2014  -- A high-level group of political and military leaders from nuclear weapons states met today to launch the “Military Materials Security Study Group,” an effort to bolster the security of the nuclear materials under the control of militaries worldwide.

“I am very pleased that The Lugar Center will be a partner in the Military Materials Security Study Group project,” said Lugar.  “Over more than two decades, the Nunn-Lugar Program demonstrated that nations could work together to safeguard large quantities of nuclear materials and weapons.  We learned a lot from that experience.  We need to build consensus about how proven security techniques and principles could be applied to military nuclear materials worldwide.”

Existing international security standards covering weapons-usable nuclear materials apply only to the 15 percent of materials classified as civilian.  The 85 percent under the control of militaries exist outside international controls.

The Study Group will develop recommendations that will be issued next year regarding how nuclear weapons states can cooperate to improve controls on these materials and to build confidence in their security.