The Lugar Center-McCourt School Bipartisan Index is a means of quantifying congressional members’ bipartisan behavior on the basis of bill sponsorship and co-sponsorship. Our aim in publishing this Index is not to promote a specific legislative agenda, as is the case for many indexes, but solely the promotion of a bipartisan approach to governance. The credibility of the Index is derived from the objectivity of its methodology; Index scores are computed formulaically from publically available data.  The Index requires no subjective assessment of specific legislative items.

Once metrics are converted into standardized values they become comparable to each other. A congressional member’s overall score is a weighted average of the five standardized metrics. The weighting system heavily favors the percentage of Bipartisan Sponsorships and the percentage of Bipartisan Co-sponsorships a member makes. The emphasis on percentages accounts for the differences in opportunity to sponsor or cosponsor legislation arising from differences in seniority or position as a committee chair or ranking member. Counts of Bipartisan Sponsorships and Co-sponsorships remain a small component of the score, however, to incentivize members to seek out opportunities for bipartisan cooperation.

Bills, but not resolutions, are included in the analysis. Additionally, narrow exclusions are applied to remove private bills and those that are purely commemorative from the analysis, such as bills that name Post Offices or create commemorative coins.  To ensure that these exclusions are applied fairly and consistently, they are removed via a computer program based on explicit criteria.  These exclusions are necessary as bills of commemorative nature typically attract a level of bipartisan support that is not comparable to typical legislation. While commemoration of events and individuals is an important function of Congress such actions do not represent the prioritization of problem solving and governance that the Index hopes to promote.

Though several steps are taken to ensure the Bipartisan Index presents a fair and informative narrative of bipartisanship, the Index at its core is quite simple. Members of Congress can increase their score either by actively seeking out agreeable ideas proposed by the opposite party or by drafting legislation that is likely to attract members of the other party. The Index rewards those who prioritize governance over posturing and aims to encourage members of Congress to seek areas of consensus as opposed to simply using legislation to delineate differences.

[1] Note: The Index makes no assumption of normality when standardizing the data. In fact, it is known that these metrics exhibit a positive skew. 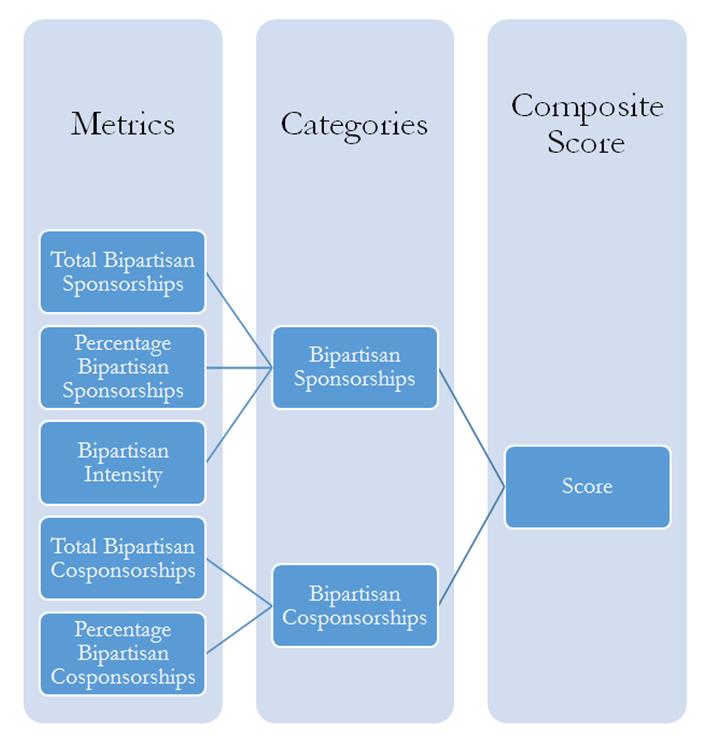