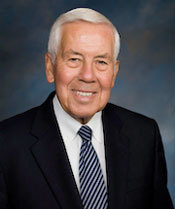 Senator Lugar retired after six terms as the 17th longest serving Senator in U.S. history in 2013. He was a past chairman of both the Agriculture Committee and the Foreign Relations Committee. He served continuously as Chairman or Ranking Member of one of those Committees from 1985 until 2013. In these posts he was central to U.S. efforts to improve global food security and domestic nutrition, and he was a champion for effective foreign assistance programs. He was the main author of the Lugar-Casey Global Food Security bill of 2009, which sought to make long-term global agricultural productivity and rural development a top U.S. development priority. Senator Lugar was the manager of his family’s 604-acre corn, soybean, and tree farm located within the city limits of Indianapolis, Indiana until 2019. As a boy, he worked with his father on this land, and he frequently observed that his farm had improved yields fourfold during his lifetime. As a farmer, he sought to employ the most advanced techniques and inputs available to maximize productivity and protect the environment.

Click here to learn more about the life and work of Senator Richard G. Lugar (Ret.).