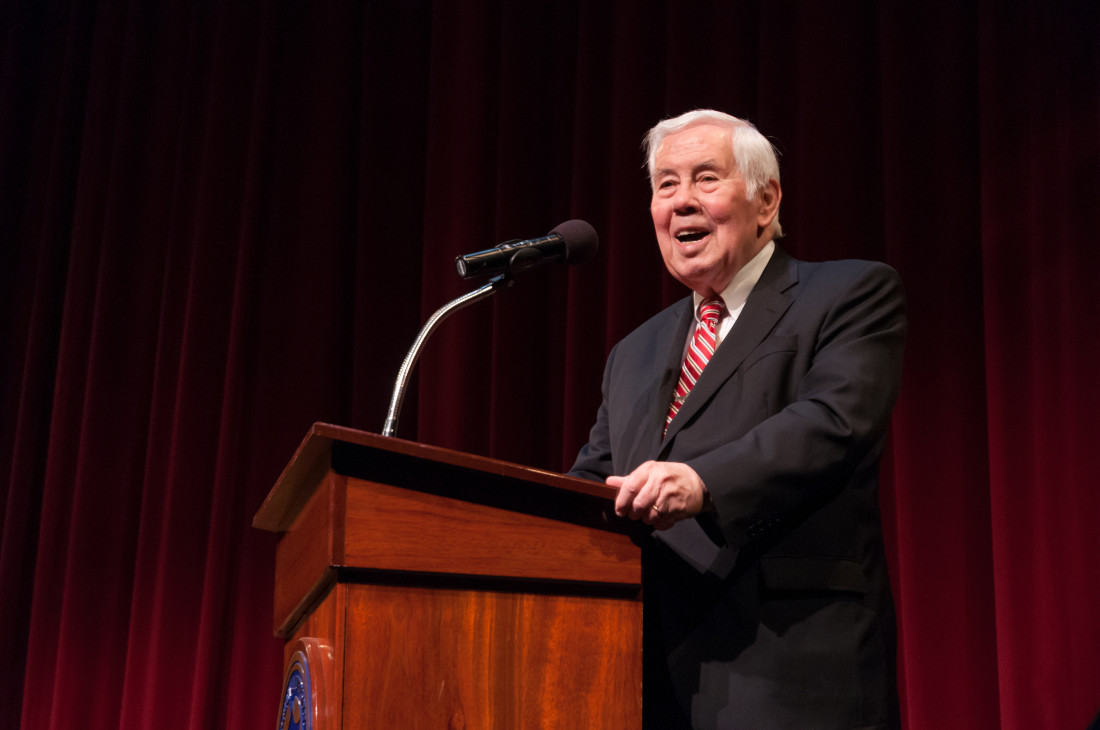 After serving as Indianapolis Mayor for eight years, a U.S. Senator from Indiana for 36,  and President of The Lugar Center for six, Senator Richard G. Lugar passed away on April 28, 2019, at the age of 87.

Senator Lugar left an outsize legacy and an impact that will continue to live on.

A funeral service was held on May 15 at St. Luke's United Methodist Church in Indianapolis, Indiana. View the service here.

"Senator Lugar’s contributions to the life of our nation are countless. Richard Lugar was a leader not only in the Senate but also on the world stage, where he worked tirelessly to bring pressure to end apartheid in South Africa and enforce treaties that destroyed Soviet weapons of mass destruction. As the longest serving member of Congress from Indiana, and a Presidential Medal of Freedom recipient, he leaves behind a legacy of public service that will inspire Hoosiers for generations."

"The world weeps alongside Indiana after just learning we lost one of our best, ever...He was an officer and gentleman, father and faith leader, a Mayor and Senator, a diplomat and legendary role model to millions."

"In Dick, I saw someone who wasn’t a Republican or Democrat first, but a problem-solver—an example of the impact a public servant can make by eschewing partisan divisiveness to instead focus on common ground."

"His dedication to bipartisanship came from a spirit of civility and decency. His commitment to preventing the spread of nuclear, chemical, and biological weapons created an extraordinary legacy that has made each of us safer and more secure."

"Senator Richard Lugar was a true statesman and patriot, a leader who served with such integrity and intelligence.  He was one of the finest Senators with whom I had the privilege of serving. Senator Lugar made such a positive difference not only as a mayor and a Senator but also globally where his foreign policy expertise was widely respected. At the Lugar Center, he continued to promote the bipartisanship that was a hallmark of his work in the Senate. "

"Dick Lugar was a man of great decency who was widely respected for his willingness to reach across the aisle in the name of good policy. I always liked working with him because he was on the level. His service made America safer and stronger."

"Sen. Richard Lugar lived his life in service to the people of Indiana and America at large. His work with Sen. Sam Nunn to advance nonproliferation is a reminder of how bipartisan efforts can help us build a brighter, more secure future."

"Senator Lugar's career is rightfully characterized by his time in the United States Senate and his outstanding leadership on matters of foreign security and international diplomacy.... He understood that progress could only occur when good ideas and good people come together -- from all sides of the political landscape. And he demonstrated a commitment to country over party, community over self, that is almost unparalleled in today's polarized world."

“Our nation has lost an extraordinary statesman who made the world a safer and better place.  I have lost a wonderful friend and trusted partner. Dick Lugar treated every person with dignity and respect. This generation and future generations can learn much from his example in the political world and in life."

"All Americans owe a debt of gratitude to Dick Lugar for the vision and leadership with Sam Nunn to deactivate or destroy thousands of nuclear warheads and missiles across the former Soviet republics... Their partnership proves that bipartisan collaboration isn’t weakness; it’s the very strength that allows us to build a better, safer world. Dick will rightly be remembered as one of America’s very greatest public servants. I will also remember him as a great mentor and friend. His lifetime of leadership should inspire all of us to re-center our lives on a purpose larger than ourselves."

"Truly sad to hear of the passing of fmr. Indiana Sen. Richard Lugar. He was a great statesman, a bipartisan leader on global issues and a good friend of Iceland."

"In so many ways my friend Dick was the consummate U.S. Senator. He combined the principled commitments of a patriot with the political instincts of a savvy legislator. He was a wise counselor and leading voice within the Republican conference and an inexhaustible bipartisan collaborator who earned the admiration of everyone across the political spectrum. And even as he built mastery over key national and international issues, he was Indiana’s devoted son the whole way — which is why Hoosiers made him their longest-serving Senator in history."

"Former Indiana Senator Richard Lugar was one of Indiana's and our nation's most illustrious and visionary statesmen, a dedicated public servant and a true titan of U.S. politics... He was renowned for his sense of decency, his integrity, his global sensibility and his discipline of study that made him the Senate's leading expert on nuclear weapons issues. He was equally renowned for his commitment to bipartisanship, for putting principle above party and for his faith in the good will of others."

"Dick Lugar was a truly decent and courageous man whose strong and steady voice for bipartisanship benefitted the US Senate, our nation and the world for over three decades. His soft language and calm demeanor and his ability to ignore bluster and bombast in the search for pragmatic answers characterized a noble career."

"Sen. Richard Lugar was a true statesman whose decency and commitment to public service represented the very best of our state of Indiana and the nation. As both mayor and senator, he demonstrated a unique ability to bring people together and forge coalitions to accomplish big things, particularly in foreign policy. I was honored to serve with Senator Lugar and to call him a friend."

"He was a true statesman and foreign policy leader. I will always remember the discussions with him."

"Dick Lugar was among the most decent men I have ever known. Kind, loyal, dedicated beyond measure to the service of the American people. Dick Lugar was my dear friend."

"America has lost a true statesman in Dick Lugar. A great mayor, senator, and mentor, he made the world safer, stood up for better foreign policy, and knew how to work across the aisle."

"He was a foreign policy giant, kind, thoughtful, and one of the most dedicated public servants I’ve ever known."

"Spent a wonderful evening with great Sen. Richard Lugar this month at ⁦his beloved ⁦Denison University⁩. Grateful to be able to honor this incomparable statesman, friend and colleague over many years. America & the world are so much better for his leadership."

"Both my father and I had the privilege of serving with Dick Lugar. He was a statesman who always put progress ahead of partisanship and inflexible ideology. He was also our friend."